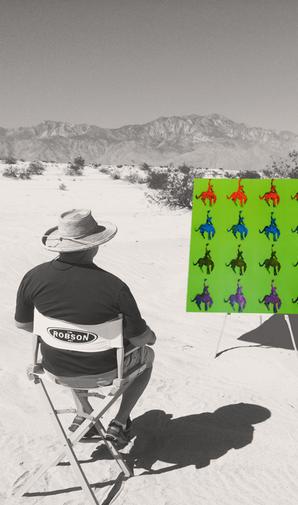 Tim Robson, award-winning contemporary artist and Arizona native, now resides in the Palm Springs area of California. Tim's art, with its open brushwork and sweeping colors, has been influenced by the likes of Fritz Scholder and Richard Diebenkorn. Tim’s work has been described as 'fresh', 'reflective' and 'reminiscent'.

From the time he was 17 until into his early 40’s, Tim channeled his creativity through the art of cooking. But he found that his career as Executive Chef left him little time to paint. In 1998, Tim decided to transition from the culinary arts to the fine arts, ultimately realizing his dream to become a professional artist.

Tim has always been driven by curiosity and the excitement of living life to the fullest. Self-taught, each painting he creates is inspired by ideas and memories from his travels and his own life experiences.

Tim's artwork may be found in public spaces, and in corporate and private collections throughout the United States.